What is symphonic electronic music? 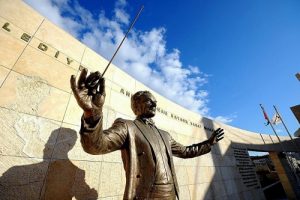 Since the beginning of the 90s in the transfer of M. Lander “Back to the Univers” on the radio “Rocks”, radio “Station”, “Open Radio”, and when I was music. TV editor – my Opus No. 379 “Spirit Lap-I” also sounded quite often on RTR, a large conceptual form of which I then called “symphonic electronic music”.
Further, when I was the head of the Khimki Center for Electronic Music and Multimedia Technologies, in one of the online discussions with the Director of Theremin Center, the head of the electronic music sector at the Moscow Conservatory. Andrei Smirnov, Tchaikovsky, wanting to clarify the meaning of the term I use, Andrei asked me:
– By the way, Aram, and what is it, “symphonic electronic music”, “symphonic electronic school”, if not a secret?
My answer was:
– It’s not a secret, of course, Andrei … Especially since here everyone who “hears about these names from me for the first time constantly“ catches me ”…))
I admit honestly, as if in spirit, I came up with this terminology myself, and very long ago – already in the 70s, because even then it seemed to me that such concepts for a serious electronic composer should seem to be “lying on the surface.” And only years later, I realized that, oddly enough, in reality it turned out to be completely wrong, because with each mention of these concepts in a conversation or in correspondence with familiar musicians, these “strange” concepts were almost always called by my interlocutors and correspondents. sincere surprise and a whole mountain of questions …
Briefly, by the term “Symphonic Electronic Music” (SEM) I mean music, electronic in form and symphonic in content, which, of course, does not mean that SEM is some kind of “electronic interpretation” or “imitation” music written for the BSO, since, along with the traditional academic apparatus of composing techniques and methods of shaping, the aesthetics of EMS also uses compositional principles of a completely different, “deep-seated” level and quality, which can not be achieved by means of BSO.
I rely in my own interpretation of the concept of SEM (different from possible others, obviously profane) on the artistic and semantic content of the term “symphonism”, which its recognized author Academician Boris Vladimirovich Asafiev invested in this fundamental musicological concept … (end of quotation).
And just a few months after the above discussion, I demonstrated my symphonic electronic work “Spirit Lap-I” at the Moscow International Festival of Electroacoustic Music “ALTERMEDIUM-03”, whose representativeness and credibility can be assessed, if only by the fact that The participants were also one of the pioneers and luminaries of the world electroacoustic music, the chairman of the Austrian Union of Composers Dieter Kaufman.
The two parts of “Spirit Lap-I”, shown in a stage-theatrical version, with the participation of performers improvising on the Terminoks, aroused great interest and a lively response from many of the audience and audience present at the Festival.
Then, 2 months after the said Festival, in 2003, the Sound Engineer magazine published my program article, The Age of Electronic Music, in which, based on musicological analysis of the de facto existing trends in the development of world music, the crisis of acoustic music for the first time I explained it from the point of view of the crisis of timbre, the definition of EMS was given and the conviction was expressed that it is the development of new symphonic-electronic schools that will already determine today the Main way of development of all music Flax culture in general.
The thoughts expressed in the article “The Century of Electronic Music” seemed so bold, unusual and unexpected to the musical public that they immediately caused a flurry of acute polemical discussions and stormy musicological debates both in various music forums and on the pages of professional magazines.
In particular, in the next issue of the magazine “Sound Director” No. 7/2003, he sharply criticized the theses of my article in his counter-article “Who Will Protect Music?” the conservative chief editor of this magazine, Anatoliy Veizenfeld, and later, well-known Ukrainian composer and musicologist Andrei Karnak joined this discussion with his rather conformist article “Music of a Different Kind”.
Unfortunately, my valiant opponents did not give me answer to all this criticism in my address in the pages of the Sound producer magazine. One can only guess about the reasons for this, but, nevertheless, my exhaustive answers to this criticism have long been posted on the network, where anyone can freely read them.
Well, here I will give only (in the form of a virtual dialogue) my answers to A. Karnak in connection with his attacks precisely on my definition of the term “Sympho-electronic music”.