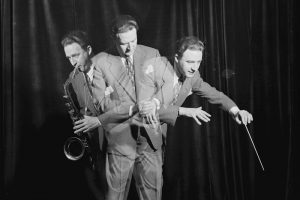 The saxophone was invented by the Belgian master Adolf Sax in 1840 and is currently one of the most brilliant wind instruments. He has a beautiful sound, timbre. On the saxophone you can play pieces of any complexity – from calm melodic melodies to the most virtuosic pieces in both classical and jazz music.
A group of saxophones from soprano to bass in combination with each other creates a fantastic ensemble sound.
Over the 167 years of its existence, the saxophone has passed a difficult path of development and has taken its rightful place in concert venues. French composer Hector Berlioz was the first to introduce the saxophone into the symphony orchestra, predicting a great future for him. He made an amazingly accurate prediction, saying that they would soon be teaching the saxophone at conservatories. Today it is the most popular and sought-after wind instrument.
In the seventies of the last (twentieth) century, the Moscow State Pedagogical Institute named after M. Gorky was a serious request for the training of professional performers and teachers in the saxophone class in the seventies of the last (twentieth) century. Gnesinykh (today the Russian Academy of Music), opening the class of the classical saxophone. This was made possible thanks to the efforts of professors of the Music and Pedagogical Institute. Gnesin – People’s Artists of Russia I.F.Pushechnikova, I.P.Mozgovenko and M.K.Shaposhnikova. In the future, the class of the classic saxophone was opened in many musical educational institutions of the country.
Currently, there are a lot of questions and problems associated with the preparation and training of students in the classical saxophone class. Just want to note that this is my personal (subjective) opinion.
In RAM them. Gnesins are taught to play the saxophone on the classical branch and jazz (you can call it pop-jazz).
The first contradiction: in the jazz department, students are simultaneously taught jazz and classical music, in the classical department only classical music is taught, completely denying jazz music. However, in practice, especially in the conditions of competition in the music market, without the knowledge of jazz music and the ability of the saxophone musician to perform it, there are big problems with employment. For example, the classical branch of the class of the saxophone RAM them. The Gnesins graduated from a large number of graduates who became graduates, but where are they? Teachers in music schools are not enough throughout Russia. In many schools, clarinetists, phagotists, and even trumpeters teach the saxophone, but not the saxophonists. There are no solo concerts of classical saxophonists, there are occasional performances by some musicians.
At the end of the school, only those who, in parallel with classical music in the school, studied jazz, are most successfully (comfortably) arranged. Here is an example: two wonderful musicians – Konstantin Gorshkov and Ivan Volkov – graduated from the RAM. Gnesinykh, one according to classical saxophone by M.K. Shaposhnikova, the other according to clarinet by I.P. Mozgovenko, and work in the best jazz orchestra of Russia named after Oleg
Lundstrem Others who do not “know” pop-jazz music, even after graduating from graduate school, remain without work, and at best work in the music school, and at worst – change the profession as a whole.
It is well known that in order to work in a music school it is not necessary to finish graduate school. Postgraduate studies are ideally needed by teachers working in universities and teaching saxophone there.
On the schools play the saxophone. In our practice, the two schools playing the saxophone – the French and the American – are the most common. The French have a fantastic technology, but the sound of the “French” saxophone resembles the sound of an oboe, then a bassoon, and the vibration with a frequent amplitude of wobble is doubtful.
The American school of learning to play the saxophone is no worse than the French. And, in my subjective opinion, for saxophonists in Russia, it is more in demand, because in general the sound of the saxophone is better for Americans. Plus, the fact that all American jazz saxophonists play classical music and play it well.
About improvisation. Some believe that the study of jazz music is reduced to the development of improvisation. Improvisation is a special art and natural gift of the performer at the same time. The ability to improvise is not given to everyone, but it is possible to learn and to some extent learn. The main thing in learning to play the saxophone is to be a good jazz orchestral musician, who owns the jazz technique of playing the instrument and styles of jazz music.
About the “family” of saxophones. In classical studies only alto saxophones are taught, sometimes they play the soprano.
But what about the tenorists and baritoneists? How to create ensembles, and what qualities will they have if a student takes a tenor or baritone sporadically? Some teachers explain the difficulties in solving this issue, referring to the lack of musical literature for the tenor and baritone. I assure you that the music literature for these instruments is not less than for alto saxophone.