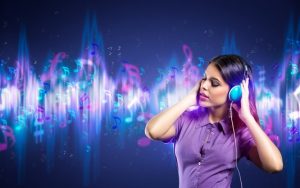 How does a high-quality soundtrack begin? Many people think that from a sound card installed in the computer. But it is not. A high-quality soundtrack begins with a QUALITATIVE SOURCE of SOUND, which will later be recorded using one or another sound card and program.
Most often in home studios, musicians record the voice of a vocalist or guitar. In order to record the voice well we need three things:
Good singer.
Good microphone
A place suitable for recording.
With a good singer, everything seems to be clear. In addition to having voice and hearing, he should be able to work with a microphone. That is, do not “puff” on the membrane, move away from the microphone when switching to the “fast and the furious” and approach the microphone in lyrical places in order to use the effect of increasing the number of bottoms while reducing the distance. Also, the singer should be able to sing in the studio, when there is no “swap” the hall. The main problem of singers in the studio is dull and inexpressive tracks (well, not rushing and that’s it!). In general, you need to train hard and hard to achieve acceptable results.
A good microphone is also a big problem. But fortunately, the dying domestic industry came to us all to the rescue. Tula “Octave” has released a microphone MK 319 A, which in the online store on peratron.narod.ru can be bought for 115 US rubles. This is a serious large-diaphragm studio condenser microphone, which operates at the level of 300-500 dollars for the bourgeois microphones of the price category (AKG C3000B is far behind). When I worked with him for the first time, I was simply amazed – for that kind of money it was just a gift: It is desirable to have a high-quality pop filter to the microphone – a grid stretched over a wire frame that is 20 centimeters from the microphone. Drooling, snot and puff vocalists get stuck in this filter. The record is much cleaner.
Further, a preamp is desirable to the microphone. If there is a mixer, then it is usually enough to pre-install it, if there is no mixer, then it is advisable to buy some piece of hardware like TL Audio Fatman FAT1, Joemeek Micromeek MQ1, Focusrite Trackmaster or Roland MMP2. But if you want to record sound from a microphone qualitatively, forget once and for all about the built-in preamplifiers of sound cards, even such clever ones as the SB Audigi Platinim EX – they tightly kill even very good microphones. A compressor for working with a microphone is desirable, but not necessary – a competent vocalist is able to sing in such a way that there will be no “scales”. And when mixing, voice is aligned with software plug-ins.
Now a few words about the room. In addition to the vocalist’s voice, a good microphone always catches the natural reverberation of the room. In modern concrete flats, this reverb has the character of “ringing”, which interferes with normal work with equalizers, compressors and electronic reverberation. In order to get rid of the “ringing”, it is enough to make a “deaf camera” where the vocalist will live with the microphone during the recording. My friends and I made such a camera very simply – wooden planks were piled on the ceiling of the room, on which the most ordinary woolen blankets are hung during recording. Of course, one of the blankets covers the ceiling, and another – lying at the feet of the vocalist. The results are simply amazing:
With a voice like everything is clear. Now go to the guitars. The first condition for high-quality guitar recording is the ability to play on it. Do not know how – it is better not to even hold, use the synthesizer simulators of this instrument. The results will be better. If you know how to play, then in addition to the skills of the game, you must have a tool of a decent class, and all the necessary processing. I will not dwell on this issue here – there are a lot of resources devoted to guitar technologies on the Internet (for example, www.guitar.ru). But I can say one thing – a cheap guitar plus a cheap lotion can ruin any decent recording. Think about using synthesizer simulators – the result is likely to be better. The same applies to the acoustic guitar – the instrument “for 16 rubles” (the older generation of musicians know what it is) should be thrown out into the dustbin, and the guitar parts should be made using normal sound libraries.
In addition to a high-quality sound source, CONTROL ACOUSTICS is important for getting good recordings. You must adequately hear what you have recorded and adequately evaluate the results of the actions of the various processing modules. Most often, the wealthy musicians buy studio control monitors. But in fact, you can do without them. Enough to put a few different speakers – from cheap multimedia speakers to large outdoor speakers. And listen to the results of their actions in different speakers, switching from one to another. By the way, such a master of information like Bob Klermountin, who made records of the overwhelming number of American stars of the 80s, generally likes to boil down in small multimedia speakers put together (so that the sound is almost mono).