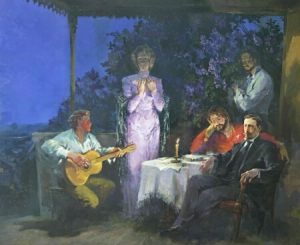 “Music is the soul of poetry, it clarifies and opens it. It makes a poetic word deeper in meaning and easier in perception. The spirit of music in the emotional aspect is the creative will that motivates talented people to create a state of sound and shape it as their world view”
Romance in music is a vocal composition written for a small poem of lyrical content, mostly love.
The term “romance” originated in Spain in the Middle Ages and originally designated a secular song in Spanish (“Romanesque”) language. In Russia, the first examples of romance can be considered Kant, distributed already in the late 17th century. And in the XVIII century. the poems of the most famous Russian poets – A. P. Sumarokov, A. F. Merzlyakov, M. V. Lomonosov – were immediately picked up by musicians and sang by amateur singers. Such works were called Russian songs.
What is the difference between a romance and a song? The distinction between these two genres is not always easy to draw, especially when it comes to early romances. But, as a rule, in the romance we hear a closer, detailed connection between music and poetic text. Music conveys not only the general mood of the verse, but also individual poetic images. So, in the lyrical romance of M. I. Glinka “I remember a wonderful moment” to the words of A. S. Pushkin:
The years went by. The storm of rebellion dispelled the old dreams …
highlighted by energetic intonations of the voice, active movement in the piano part. Glinka emphasized intonation even such a miniature, but important detail, as the word “tears” in the last line:
And life, and tears, and love. The main feature of the romance – a more detailed connection between words and music – defines others. For example, greater pithiness, imagery of the piano part, which grows out of the accompaniment of a voice into an equal member of the ensemble. The beginning of the romance of the romance – the first half of the XIX century. This is a period that is generally characterized by a special interest in lyrical genres expressing the world of a person’s personal experiences.
Thanks to their sincerity, sincerity and melodic beauty, the best works of Glinka and his contemporaries sang throughout Russia, and some became folk songs: “The snowstorm sweeps along the street” by A.E. Varlamov; “A bell is rattling monotonously” by A. L. Gurilev.
Sometimes the romance goes beyond the limits of lyricism, acquiring drama and approaching the operatic aria. These are some of the romances of P. I. Tchaikovsky (“Does Day Reign”, “Serenade of Don Juan”). And the vocal works of M. P. Mussorgsky are difficult even to call romances: these are live musical portraits that convey the appearance and character of specific characters (“The Seminarian”, “The Orphan”, “The Mischievous”). The traditions of the classic romance continue in the works of Soviet authors: Yu. A. Shaporin, A. N. Aleksandrov, D. D. Shostakovich, D. B. Kabalevsky, G. V., Sviridov, B. N. Lyatoshinsky, O. V. Taktakishvili.
Features of vocal romance
In its form, the romance is similar to a song; as well as the last, it is written in the knee stock, but in it that quadrature is not necessary, that parity of measures, which are pursued in the song. In the romance, deviations are allowed in the form of so-called extensions or insertions, transitions from one knee to another. The vocal part of the romance should have a clear and embossed melodic outline and be melodious. Refrain, or chorus, in the romance is most often absent. In the romance one should pay more attention to the transfer of the general mood of the text than to the detailed illustration of its details. Interest should mainly lie in the melody, and not in the accompaniment.
The romance is written for singing with the accompaniment of one instrument, mainly piano, and belongs to the category of chamber music, although some romances are accompanied by an orchestra.
Genre signs of romance
The content of the romance does not go beyond the limits of the lyrics. The text is dedicated to a certain experience, usually a love affair.
Romance is characterized by only one lyrical mood. However, the spectrum of emotional states in the romance is so large that every performer and listener has the opportunity to choose the one closest to him.
Due to the fact that the romance usually expresses a love experience, it either has or implies an addressee, and therefore, is initially dialogical in its very content.
The presence of two heroes gives rise to one of the most important qualities of a romance – its intimacy, chamber nature.
Romance as a vocal-poetic genre is a triangular structure in which the word (text), music and speech (performance) are equally significant.