In the power of music 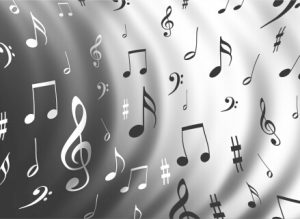 Music has accompanied man since prehistoric times. The joy of prey, a successful hunt, the challenge of the rain was accompanied by ritual sounds (a skull filled with dry berries or a gong prototype could be used as a musical instrument), such was primitive music.
Thousands of years passed, musical instruments underwent significant changes, folk music (folklore) developed, words were added to it, many works survived to our days, passed down from generation to generation. Music is eternal, and the development of mankind without it is unthinkable.
The development of musical notation made it possible to transfer music not only from teacher to student, but also to convey many musical works to descendants. The Renaissance epoch left imperishable masterpieces to the world (among them, both painting and music), it was during this period that so-called classical music was born, revered to this day, taught in musical institutions as an example of musical taste. However, classical music has always been the lot of the aristocracy; every family had a piano at home, playing on which was an indispensable condition for good manners. But music existed not only in solemn halls and at balls, more simple classes continued to develop invaluable folklore, which became the foundation for subsequent trends, which modern music abounds in.
Now music surrounds us almost everywhere. At the sound of a powerful orchestral crescendo, tears come to my eyes and goosebumps run down my back. Musical accompaniment always enhances the artistic expressiveness of films and performances. Rock musicians make us jump to our feet and dance, while parents lull the kids with quiet lullabies.
As already mentioned, the love of music has quite deep roots: people have been composing and listening to it since culture began. More than 30 thousand years ago, our ancestors already played stone flutes and bone harps. It seems that this passion has a congenital nature. Infants intuitively turn to the source of pleasant sounds (consonances) and turn away from unpleasant (dissonances). And when we are in awe of the final sounds of a symphony, the same pleasure centers are activated in the brain as during a tasty meal, having sex or taking intoxicating stimulants.
During the time when we hear music, the brain reacts to it by activating several areas outside the auditory cortex. The processing of musical information is influenced by a person’s visual, tactile and emotional experience.
The sounds of a person’s reach are transformed by the structures of the outer and middle ears into vibrations of the fluid in the inner ear. The tiny bone of the middle ear, the stirrup, vibrates (shakes) the cochlea, changing the pressure of the fluid that fills it.
In turn, the vibrations of the cochlea’s basilar membrane cause the sensory receptors of the ear, the hair cells, to generate electrical signals that travel along the auditory nerve to the brain. Each hair cell is tuned to a specific frequency of fluid oscillations.
Brain processing of music is based on hierarchical and spatial principles. The primary auditory cortex, which receives inputs from the ear and (through the thalamus) of the lower auditory centers, participates in the initial processes of music perception, for example, analyzing the pitch (tone frequency). Under the influence of experience, the primary auditory cortex can be reconfigured – it increases the number of cells that have maximum reactivity to important sounds and musical tones for a person, which affects the further processing of musical information in the secondary auditory areas of the cortex and the auditory associative zones, where more complex musical characteristics (harmony, melody and rhythm).
When a musician plays an instrument, the activity of the motor cortex, cerebellum, and other brain structures involved in the planning and implementation of specific, precisely aligned movements in time, increases.
Why is music so important to man and has such power over him?
Neurobiologists have no final answers yet. However, in recent years, some data have begun to appear on where and how the processing of musical information takes place. The study of patients with traumatic brain injuries and the study of healthy people with modern methods of neuroimaging led scientists to an unexpected conclusion: there is no specialized center for perception of music in the human brain. Its processing involves numerous areas dispersed throughout the brain, including those that are often involved in other forms of cognitive activity. The dimensions of the active zones vary depending on the individual experience and musical preparation of the person. Our ear has the smallest number of sensory cells compared to other senses.